Okay, so for a short while the world had been revolving around presidential elections, demonetization process and climate change; meanwhile the travel & hotel domain witnessed a landmark agreement between two of the biggest names in hospitality industry, this September.
With the merging of Starwood Hotel & Resorts Worldwide Inc. with Marriott International Inc. the benefits that can be availed by customers on either side, are widened to an extent comprised of more destinations, free nights & stays, air travel packages and rewarding facilities for elite members.Loyalists might turn skeptical about whether they should stick to their parent brand or transfer points to gain more flexibility while planning a new trip.
As they say it “bringing best of both worlds”, which sounds quite similar to Miley Cyrus’s solo, the point transfer lets you opt for SPG /Marriott Reward Programmes & lifetime status matches on both sides.
Ritz-Carlton is not that worth mentioning because it goes almost parallel with Marriott except in areas of credit cards and promotions. Former has good short-term opportunities while the later offers global promotions. People already in the business know it. For the time being, the prima-facie is “Marriot-Starwood”.Here is my analysis
If you (as a traveler) prefer trying out new routes and places over facilities and rewards; this is your chance to push your luck. Both Starwood and Marriott have their geographical counters to attract journey enthusiasts. That means you now get more options to explore on your trip to paradise.
Both Starwood & Marriott have hotel chains stretched over Asia-Pacific, Middle East, South America, Africa and European nations. But Starwood has relatively less number of properties in specific region like South West Florida and having a total count of over 1400 approx properties worldwide.But if you are more interested in luxury experiences of grand tournaments, concerts and merchandise than hotel coverage, then probably you should go for a point transfer again, this time in reverse. Starwood has got roughly 4 times the number of luxury programmes as Marriott has.

Reciprocity also remains with the transfer of status along with points. Fair enough! Isn’t it?

You get an edge being an elite with Gold status on one side (Marriott) whereas with Platinum status on the other (Starwood). I will specify it near the end of this article.
Loyalists won’t have to worry about proving themselves again and again as they shall get what they have earned and invested in so far & what they deserve.

Basically status match means you elite membership remains at the same hierarchy level irrespective of the side you choose as both the giants have equivalent ranks for incoming members from opposite ends.

As I said, I will just put things to the precise
Note that you can always transfer points back and forth in case you are unsatisfied with redemption. Obviously trying out new things is not a sin.

You just have to remember one basic numerical formula & everything can easily be sorted out.

There is a gain of 0.4 cents when you shift towards Starwood and same amount of loss vice-versa.

Though the combined chain has more than 5,700 hotels around the globe yet they operate individually & have their own limitations. You just can’t expect all you want but atleast grab the maximum prize via point transfer made possible through the partnership. Method can be initiated by visiting either Marriott’s or Starwood’s official website.
Visualize this as 2 super shares of a polarised world of hotels having different governments with bilateral ties to keep diplomatic relations. The partnership just puts you in place of a foreign ambassador of one country who is granted fairly from both sides; but one at a time.

By all facts and figures, Marriott has now become the world’s largest publicly-traded hospitality company.

But it is strange to read that even though, Starwood is a subsidiary of it, Starwood has got deep loyalists having higher incomes. 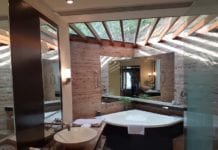