Up until 2015, Indian aviation passengers were booking cheapest fares on their favorite OTA search engine or directly booking with the airline company. Most of the guests preferred using OTA such as Yatra, GoIbibo, MakeMyTrip as they could reference all the airline fare in a single place and make purchases as per requirement of time, date and particular fare class.

Airlines sold tickets by the lowest fare to higher fare. There wasn’t much difference except the lower class fare would be sold out and the passenger would be forced to by the cheapest available fare class.

Airline came up with 3 effective Fares

The only difference between them was cancellation charges. However, Club Vistara is a loyalty program that was introduced as a revenue based program. Amount of miles your received were corresponding to the amount of money you spent on acquiring the ticket vs amount of distance flown.

In July of 2015, a notice from the Director General of Civil Aviation (DGCA) read, “Sub-rule (1) of rule 135 of the Aircraft Rules, 1937 states that every air transport undertaking engaged in scheduled air services shall establish tariff having regard to all relevant factors, including the cost of operation, characteristics of service, reasonable profit and the generally prevailing tariff.”

In simpler terms, the government ‘delinked’ the price of your airline ticket from services that you get on board a plane like meals, airport lounge charges, web check-in, carry-on baggage and even charging for a seat, as it was felt unnecessary to all.

The move was seen as one that could ‘unbundle’ services of an airline in a way that passengers could reduce the price they paid. However, two years later, airlines have managed to create a revenue stream from these ancillary services that can now cost a flyer more than the base fare for their ticket.

Jet Airways launched a new strategy in August 2015 that was considered a hallmark of change in the way Indian aviation operated. Subject to Etihad’s frequent program lining up all the partner airlines, Jet Airways customized it business like other Etihad’s airlines such as Air Seychelles, Etihad Airways, Air Serbia, Alitalia, Air Berlin, Etihad Regional Airline (Darwin) and Niki Airways.

Jet Airways launched 4 fare selection over Vistara 3 fares with major variation in them on August 17, 2016. 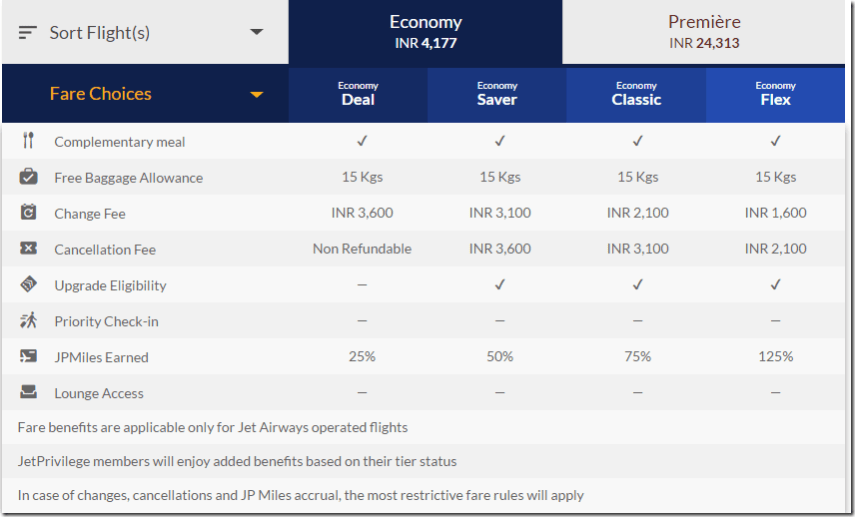 There was a change of Tier point earning too.  One of the best feature of Jet Airways till date is dynamic tier point accumulation that allows JetPrivilege customer to get more tier points when they are paying up a premium for the flight. Hence, the customer gets a credit of multiple flights for the same route. This feature allows multiple JetPrivilege customers to be on higher membership tier Gold/Platinum.

Jet Airways had massive outcry by Platinums when they saw that they can’t be upgraded and they won’t be getting any refund on booking those fares. Jet Airways reasoning was that they didn’t earn any money from passengers if they used their elite benefits like lounge access and was rather loss-making especially for passengers flying out of Mumbai or Delhi airport. Except the fault in the logic is that you are a national airline and you can’t make policy for just metros in the mind.  The passenger out of Vadodara, Ahmedabad, Indore, Kochi, Jodhpur, Jaipur, Chandigarh. As I explained in this post, Jet Airways has been cutting lounges.

The problem with Jet Airways thinking is a feature that doesn’t cost them money and makes members loyal, why would you tinker with that? That is what happened with Deal tickets which can’t be upgraded and they can’t be canceled. It should go out as a gesture of courtesy for passengers who fly more than 60 flights a year (5 flights a month).  If they are flying so much, their plans are bound to change. This is the element that makes JetPrivilege program even worth investing into and earning the higher class. There are passengers who are flying over 100 flights a year and you are worried about short change.

Now, Indigo Airlines which is by far the largest airlines of India, which is technically a low-cost airline except it really doesn’t operate as a Low-Cost Airline. Indigo introduced 2 new fares in a way of feature and figured out a way to charge passengers more dime.

Flexible Fare allows travelers to change to another flight at no extra charge. With the regular fare, this change costs Rs 2250 per person per sector. Additionally, Flexible Fare offers complimentary seat selection.

The Lite Fare – These lower fares can be selected on bookings made at least 15 days before the date of travel. In case the traveler arrives with check-in baggage of up to 15 kgs, they need to pay a fee of Rs 200 at the airport.

The lite fare is targeted at frequent flyer with quick turnaround time except the caveat is that it needs to be booked 15 days in advance. Most of the business travelers don’t plan 15 days in advance and hence won’t be able to take advantage of this fare. People who travel on leisure rarely would ever travel without baggage.

And this is where frequent flyers have started to feel the pinch as nearly 40% of your air ticket cost could be just for a choice of seat on a flight.

This is the chart on how much Airline charges you from just allowing you to select your own seat. 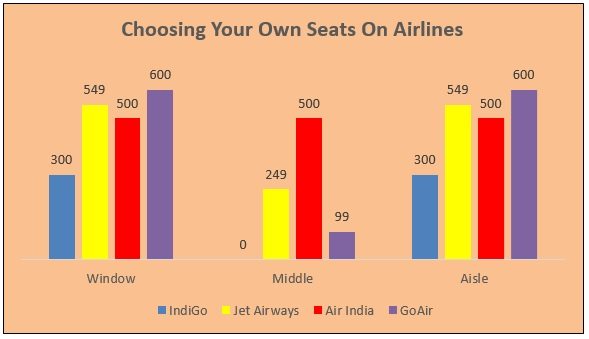 IndiGo Airline’s 2016 annual report defines ancillary revenue as, “Revenue from ancillary passenger-related services, which mainly consists of charges for special service requests (including seat selection, charges for infants, and assistance for unaccompanied minors), ticket modification or cancellation including expiry of credit shell, excess baggage, lounge income and convenience fees; and revenue derived from products and services that are ancillary to our airline passenger services, which mainly consists of cargo services, in-flight sales, advertisement, commission from insurance and our tours and packages business.”