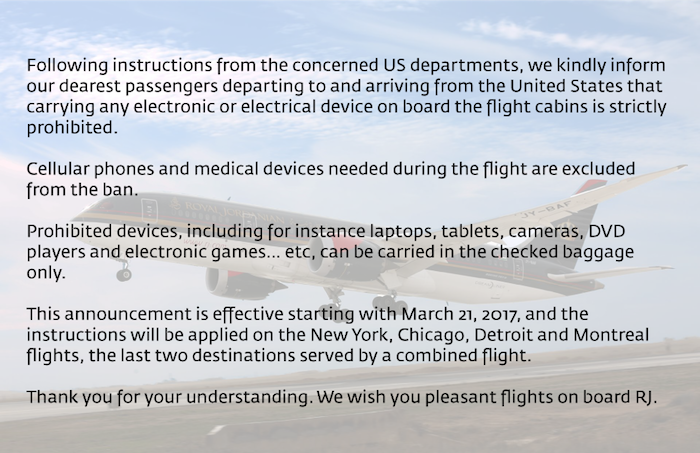 A few hours later, UK joined the USA with Electronic ban.  This is going to make everything a massive hassle. There would be so many security issues.

Late last night the Associated Press reported the electronics ban would apply to flights from Amman, Abu Dhabi, Cairo, Casablanca, Dubai, Doha, Istanbul, Jeddah, Kuwait City, and Riyadh. Those are almost all the major airports in the Middle East and Northern Africa and are hubs for the national airlines of each respective country. The impacted airlines are:

The prohibition on electronics in the passenger cabin impacts flights to the United States from any of these cities, regardless of where the passenger originates. So if you’re connecting through Istanbul from any of the 115 countries served by Turkish Airlines, you won’t be able to bring your electronics onboard for the flight to the United States.

The Department of Homeland Security has finally published details, which note:

Electronic devices larger than a cell phone/smart phone will not be allowed to be carried onboard the aircraft in carry-on luggage or other accessible property. Electronic devices that exceed this size limit must be secured in checked luggage. Necessary medical devices will be allowed to remain in a passenger’s possession after they are screened.

The approximate size of a commonly available smartphone is considered to be a guideline for passengers. Examples of large electronic devices that will not be allowed in the cabin on affected flights include, but are not limited to:

As per the BBC, the ban is only on Laptops in cabin baggage, and not other electronic devices, and it affects flights originating from the following 6 countries:

The ban is on all electronic devices more than 16cm in length, 9.3cm in width, or 1.5cm depth.

The ban impacts all carriers operating on these markets. As per the BBC again, the following airlines will be impacted:

The ban is already implemented by the UK immediately whereas the USA is allowing till Saturday to implement the ban. So if you are planning to fly on any of these flights, make sure you are aware of the procedure. I have absolutely zero clues how you are going to safeguard yourself from theft and breakage. It is a guarantee that your baggage is handled very roughly. Maybe, soon I will do a post on how to pack your electronics to keep them safe from rough handling.

This has not been adequately explained, in my opinion. Some of them are unsurprising based on past incidents (namely Cairo, though Istanbul had issues last summer). Others, such as Abu Dhabi, are nearly inexplicable.

The United States operates a Pre-Clearance facility in Abu Dhabi, so those passengers are already subject to enhanced screening and scrutiny. Those planes even arrive in the U.S. as domestic flights! Abu Dhabi is considered more secure than many Airports on American soil. Moreover, it just doesn’t make any sense to me. If they want to implement such a ban, just do it on all the international Airlines. Any aircraft coming outside from USA or UK should have the same policy. If this is really related to terror, do you think terrorist won’t change the flight plan?

Is this about protectionist trade policies?

This actually seems more likely to me, because of few glaring exclusion:

While most of the countries on the list have very stable governments and infrastructure, there is an active threat of terrorism in many parts of Nigeria. Concerns surrounding the Boko Haram group have necessitated counter-terrorism drills at the airport itself.

Pakistan is home to best Terrorist groups. Osama Bin Laden was found and killed in Pakistan. A Terrorist group such as Lashkar-e-Tauba, Al-Qaida are still active in Pakistan. There is a bill in speculation about Pakistan to be declared as a state-sponsored terrorist nation.  There are direct flights between Pakistan and United States on PIA

What about batteries in the hold? Can these devices even be checked?

The FAA has limited the transport of lithium-ion batteries as cargo, they are still allowed for personal use:

So you want to put Power banks in a hand bag? But want laptops to be in checked-in bags? Damn! This is confusing. What are you trying to achieve here?

The most immediate impact of this directive will be to inconvenience travelers. Passengers wanting to travel with tablets and laptops will have to risk theft and damage in order to do so. This will be a complete non-starter for many (or most) business travelers. Everyone knows how roughly and shoddily airlines handle baggage. Chances of your electronics breaking are very high.

Of course Jet Airways and Air India would profit from this news. As Jet Airways flies to Amsterdam and then passengers travel onward on Delta or KLM flights. Air India mostly have direct flight to the USA. Air India was making massive losses till now but this might be a news which can make them some serious profit. But then again we all know how bad Air India livery looks. So I am not sure they would be able to take full advantage of this one.

Jet Airways can get direct flights to USA soon or Etihad can route their American passengers via Delhi/Mumbai/Bangalore/Chennai/Kolkata. Those airports can take on that capacity. Jet Airways could do a reverse route. Before Amsterdam, Jet Airways was using Abu Dhabi as a gateway to American destinations. I don’t see why Etihad can’t do that in reverse other than a capacity difference for the airport. However, again, this is only passengers flying to the USA that need to be routed.

There are logistical questions as well — will all outstations know to police electronics in hand-baggage? What happens if a passenger goes to board their connecting flight to Dubai (the largest airport in the world for international passenger traffic) and has a Kindle in their purse? Will their checked bag be pulled so they can add their devices? How will those impact departures?

Then there’s the economics. It’s hard to imagine this won’t financially hurt the nine carriers who have hubs in these cities. Business travelers will almost certainly have to book away, as the convenience of a one-stop routing on Emirates is nearly obliterated by the risk of losing access to sensitive materials.

And of course, it all seems like a rather foolhardy exercise, as bad actors could easily circumvent this policy by booking a connecting flight on separate tickets or just through another city. There is 5th freedom route for Athens-Newark for Emirates. How does that get affected? Emirates can fly more passengers to Athens. I doubt Athens would mind that as they already would do anything to boost their economy which is in dire straits.